Home > About Us > News > Pulaski Parade with NCUAâS Michael Fryzel

NEW YORK, NY (October 14, 2009) – At this year’s annual Pulaski Day Parade, once was not enough for National Credit Union Administration Board Member Michael Fryzel, who not only walked alongside New York City Mayor Michael Bloomberg to start the parade, but later marched
the route again with nearly 200 employees of the Polish & Slavic Federal Credit Union.

Serving as the Honorary Grand Marshal of the 72nd Annual Casmir Pulaski Day Parade, October 4, Fryzel had the honor of leading the famed ethnic parade in New York. He shared the honor with the Mayor and the Parade’s Grand Marshal, Curtis Sliwa. They were all accompanied by Mr. Bogdan Chmielewski, PSFCU CEO, and Mr. Krzysztof Matyszczyk, PSFCU Chairman of the Board, who were both selected to spearhead the Parade in recognition of the PSFCU’s Diamond Sponsorship. The PSFCU sent the largest contingent to the Parade, which this year carried the theme: “For your freedom and ours.”

“The parade’s theme this year echoes the main mission of the credit union movement – people helping people,” said Mr. Chmielewski.  “I think our sponsorship of the event provided proof once again that the PSFCU is the backbone of the Polish-American community.  And I’m honored that Mr. Fryzel was able to spend time with us and witness the bond we have with our community.”

Fryzel, who is of Polish heritage, was clearly moved by the first-time experience and of the sight of so much Polish pride on display.  “It was a major highlight of my career, and a true honor to walk the parade route with Mayor Bloomberg,” said Fryzel.  “I also commend the PSFCU, which exemplifies what credit unions do best: Give back to the community and provide the support for events such as these.”

Attendance at this year’s parade was the highest in years, according to parade officials.  The PSFCU float was decorated with artwork depicting two legendary Polish figures who are also heroes in the U.S.: Gen. Casmir Pulaski and Thaddeus Kosciuszko.  The float, which also treated parade-watchers to the sounds of popular Polish songs and music through its impressive sound system, featured signage and imagery that expressed gratitude to all veterans for their sacrifice in fighting for freedom. Leading the colorful float was the PSFCU’s popular Mobile Branch – a large vehicle equipped to handle all functions of its brick-and-mortar counterparts.

Fryzel, the first Polish-American to be appointed to the NCUA board, said: “The PSFCU is a major player in the financial sector of New York and New Jersey, and its sponsorship of countless community activities is a clear showing of the credit union philosophy of member commitment.”

In addition to the Pulaski Parade, the PSFCU also sponsors more than 70 major community events throughout the year, and has awarded more than $1.8 million in scholarships to local students over the past nine years. 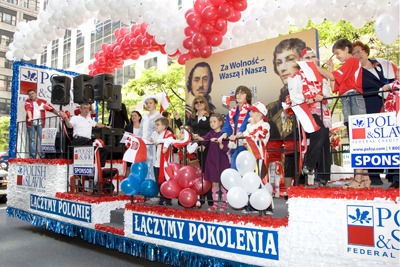 Children of the PSFCU's employees & students of the S. GaweÅ Judo Club
on the PSFCU's float

“The PSFCU is doing a fantastic job of meeting the needs of its members, and I would ask that they continue to support their credit union because its efforts not only help the members, but the entire Polish community,” commented Fryzel, who paid an official whole-day visit to the Polish & Slavic Federal Credit Union the following Monday.