Home > About Us > News > High-school graduates received the PSFCU scholarships 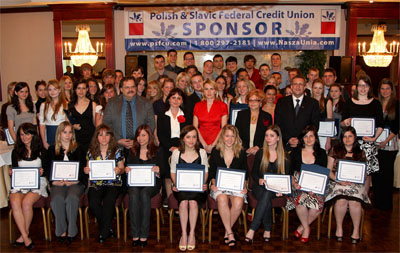 Students with the Board of Directors

Over 70 scholarship recipients personally received their awards from PSFCU Directors. Students arrived at the ceremony accompanied by their parents and teachers. Upon receipt of a scholarship certificate, each recipient had an opportunity to say a few words about the college into which he or she was admitted. These short interviews confirmed that our Credit Union's scholarship recipients are very talented and ambitious.

The scholarship program for high-school seniors is organized under the auspices of the New York State Credit Union League (NYSCUL), while scholarships for college students are awarded as part of PSFCU’s own, autonomous program.

All persons seeking financial aid from PSFCU must be Credit Union members and primary account holders. Future scholarship recipients are evaluated on the basis of their study results and involvement in extracurricular and social activities. They are also judged on the basis of an essay on a previously assigned subject.

High-school students applying for a scholarship are automatically entered in the scholarship program organized by NYSCUL, participated by 102 other credit unions. Under its program, NYSCU has awarded a total of $13,500 in scholarships for 18 persons. It is always a great honor to those selected.

In the past, only 3 young PSFCU members received NYSCUL scholarships. This year, four of our members received that honor: Katharine Bedkowski, Marta Marciszewska, PrzemysÅaw Lasota and Å»aneta Wykowska. These persons will receive four scholarships: two $500 ones and two worth $1000 each.