Home > About Us > News > PSFCU Encourages Students to Expand Their Scientific Knowledge.

Our Credit Union Encourages Students to Expand Their Scientific Knowledge

The Polish and Slavic Federal Credit Union held an award ceremony for winners of the „Astronomy Adventure with Copernicus” program on April 24 at its headquarters located at McGuinness Blvd. in Greenpoint.

The ceremony was attended by the students and their parents, Polish school teachers and principals, Dorota Andraka – Chairwoman of the Polish Supplementary School Council of America, members of the PSFCU Board of Directors - ElÅ¼bieta Baumgartner, MaÅgorzata WÄdoÅowska, Krystyna Myssura, Kaja Sawczuk and Wojciech Mleczko, as well as members of our Credit Union’s management including CEO, Bogdan Chmielewski.

It was ElÅ¼bieta Baumgartner and MaÅgorzata WÄdoÅowska who initiated the idea of the competition, which won the support of the remaining members of the Board of Directors.

PSFCU Directors hand in the awards

„Astronomy Adventure with Copernicus” was organized in cooperation with the Polish Supplementary School Council of America, an organization uniting 60 schools providing instruction to approximately 10 thousand students. As a reward, twenty students will take part in a summer camp at the Kopernik Observatory and Science Center in Vestal, NY, with the expenses covered by PSFCU.

The Kopernik Observatory was established by Kopernik Society, a Polish-American organization which also oversees its operation. It is one of the most renowned public observatories in US North East.

The competition began in February 2008 and aimed at selecting students interested in sciences, who wrote best essays on the topic “How can the example of Nicolaus Copernicus and the financial support of Our Union assist me in becoming a scientist?” The essays were evaluated by a special committee composed of Polish Supplementary School Council of America teachers. 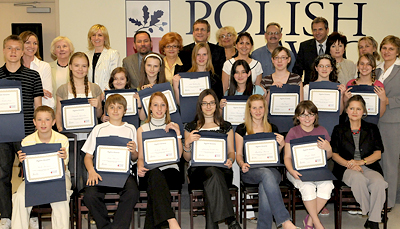