Since Wednesday, June 22, 2016, residents of Wallington, New Jersey, and the area have been able to enjoy the services of our Credit Union’s newly opened branch there. It is the 17th location of the Polish & Slavic Federal Credit Union, which has branches in three states: New York, New Jersey and Illinois. “Today is a very important day for many reasons: we are opening our 17th branch in the fortieth anniversary year of the Credit Union’s existence,” said Malgorzata Gradzki, Chairwoman of the PSFCU Board of Directors, during the branch grand opening, which took place on Saturday June 25. 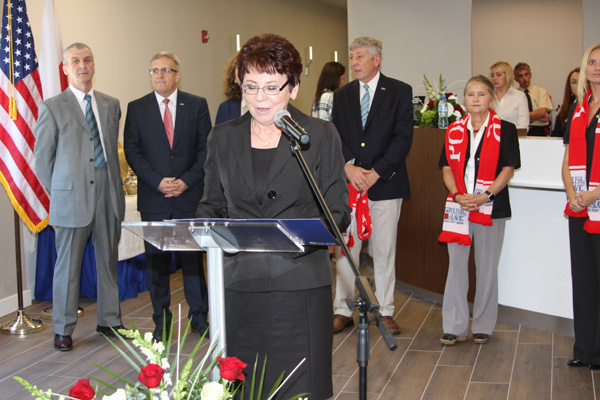 Chairwoman of the PSFCU Board of Directors, Malgorzata Gradzki, addresses the guests

The official ribbon cutting ceremony was attended by many representatives of Polish ethnic organizations, businesses and schools, as well as priests from the local parish. Also honoring us with their attendance were members of Wallington City Council: Council President Christopher G. Sinisi and Councilmen Roman Kruk and Khaldoun Androwis, City Administrator Witold Baginski, and Walter Wargacki, long-time Mayor of Wallington. President Sinisi congratulated our manage­ment for opening the Wallington branch and wished us 100 years of operation. PSFCU Chief Executive Officer Bogdan Chmielewski was clearly pleased that our Credit Union had once again opened a new location: “Because we are a Polish-American financial institution, we try to reach the greatest possible number of Polish people with our products and services... Wallington is the home of Most Sacred Heart of Jesus Parish, the Cracovia Polish National Home, and many Polish stores, restaurants and businesses... now we are better equipped to serve the residents of Wallington, East Rutherford, Carlstadt and surrounding towns... I promise that our Credit Union will be actively involved in all initiatives aiming to improve the life of Polish people and strengthen the Polish community in Bergen County.” The PSFCU’s Chief Executive Officer gave special thanks to City Council as well as former Wallington Mayor Walter Wargacki.

The grand opening was unique. Polish tradition and culture were featured in the new facility’s modern and spacious interior. The Aria Choir sang the Polish and American national anthems, and the beautiful performance by the Podhale children’s dance group made us feel like were in the very heart of the Polish Tatra Mountains. There was also Polish food, as well as attractive gifts from our Credit Union. The entire event was covered by the Polish ethnic media.

Reverend Feliks Marciniak, Pastor of Most Sacred Heart of Jesus Parish in Wallington, along with Assistant Pastors Marcin Kuperski and Steven D’Andrea, prayed “for the people who will be working at this Credit Union branch, and for the people who will be its customers.” The priests blessed those in attendance, including the branch staff. Then the Chairperson of the PSFCU Board of Directors, Father Marciniak and Wallington City Council President Sinisi cut the ribbon together, thus officially opening the new PSFCU branch. 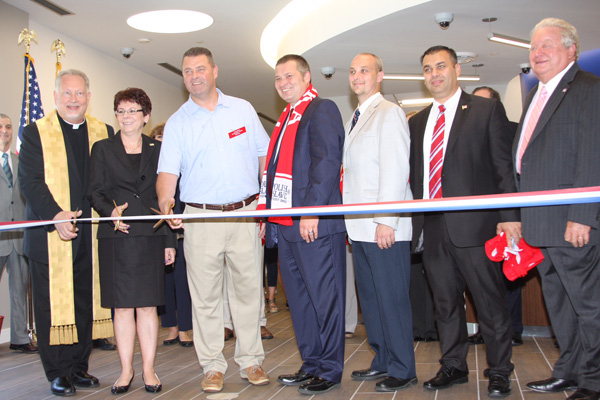 Our Credit Union is the financial strength of the Polish community, providing financial services as well as supporting Polish ethnic initiatives through donations and scholarship programs, to which the PSFCU allocated $350,000 this year alone. “After 40 years, we have over $1,700,000,000 in assets, more than 87,000 members and 17 bran­ches located in three states: New York, New Jersey and Illinois. In addition, thanks to our donations and sponsorship programs, we are the greatest source of support for the US Polish community at the local and national level. Our Credit Union has become a symbol of the success of the Polish community in the United States... I am convinced that our institution will become an integral part of the Polish community as well as of Wallington as a whole,” said the Board Chairwoman. 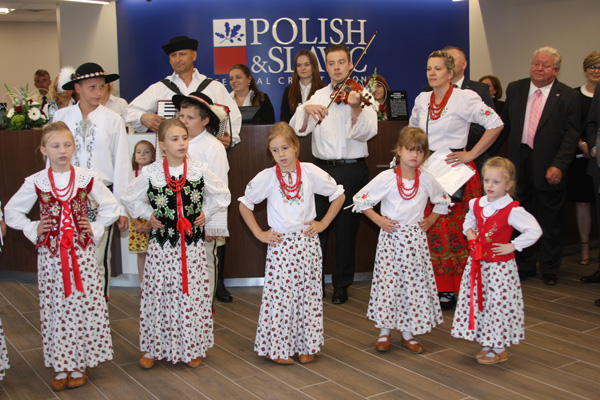 The PSFCU’s new Wallington branch was designed to be functional, as well as elegant and modern. The branch has four separate customer service desks and four teller stations. The spacious and ample parking area at the front and side of the facility is a huge advantage. Ms. Rita Kotynski serves as the Branch Manager.