We are very pleased to announce that Mr. Grzegorz Bierecki, creator and founder of Polish National Association of Cooperative Savings & Credit Unions — a financial institution serving over 2.6 million households with shares totaling over 16 million PLN— has been unanimously voted the new Chair of the World Council of Credit Unions (WOCCU) at the organization’s World Conference in Ottawa.

Born in 1963, Mr. Bierecki was a “Solidarity” activist and participated in Poland’s Round Table negotiations in 1989, on the subcommittee for higher education. He has over 20 years of expertise in Poland’s financial market, was instrumental in the creation of the Polish National Association of Cooperative Savings & Credit Unions and has served as the President and CEO of the Association since 1992. In 2011, Mr. Bierecki was elected to the Polish Senate.

For the past 12 years, Mr. Bierecki has been a member of the Board of Directors of the World Council of Credit Unions and has also served as the First Vice President of WOCCU since 2011. WOCCU, headquartered in Madison, is one of the largest and most prestigious financial organizations in the world, with representation in 101 countries and 1.6 trillion dollars in assets. 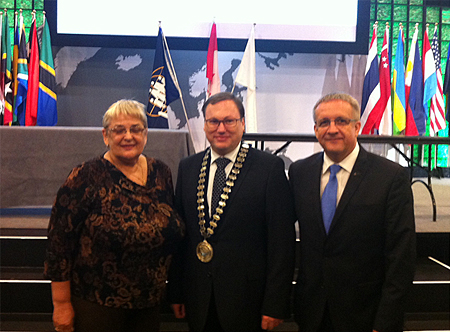 Member of the PSFCU Board of Directors, Ms. BoÅ¼ena Kajewska-Pielarz and
PSFCU President and CEO, Mr. Bogdan Chmielewski with the newly-elected
Chair of the World Council of Credit Unions, Mr. Grzegorz Bierecki

“The decision to elect me for the position of CEO of the World Council of Credit Unions is an honor for me,” Mr. Bierecki commented on his most recent appointment. “It is certainly a recognition of the achievements and 20 years of efforts on the part of the Polish National Association of Cooperative Savings & Credit Unions. I am pleased that at World Council of Credit Unions, I will have the privilege of representing not only Polish SKOK, but also Polonia’s credit unions, among which I have many friends. I sincerely hope that in the near future, I will have the opportunity to visit New York and be a guest at the Polish and Slavic Federal Credit Union, the largest Polish financial institution outside Polish borders.”

“We are very proud of the fact that a Pole has been elected as Chairman of the World Council of Credit Unions,” said Mr. Bogdan Chmielewski, our Credit Union’s President and CEO. “It is also notable that Mr. Grzegorz Bierecki, former active member of the Solidarity movement, is the creator and founder of Polish National Association of Cooperative Savings & Credit Unions. It is an undeniable proof of the influence of Polish people on the development of credit union movement in the world, and the ways in which this influence is recognized by the movement’s international authorities.”