Home > About Us > News > NCUA Chairman At PSFCU Headquarters

Chairman of National Credit Union Administration, the Honorable Todd M. Harper, visited the headquarters of the Polish & Slavic Federal Credit Union on Friday, May 13, 2022. Mr. Harper, who was accompanied by NCUA Deputy Director of the Office of External Affairs and Communications, Samuel Schumach, attended a meeting devoted to the discussion of the current situation in the war-torn Ukraine and the way credit unions could assist the country and its population. 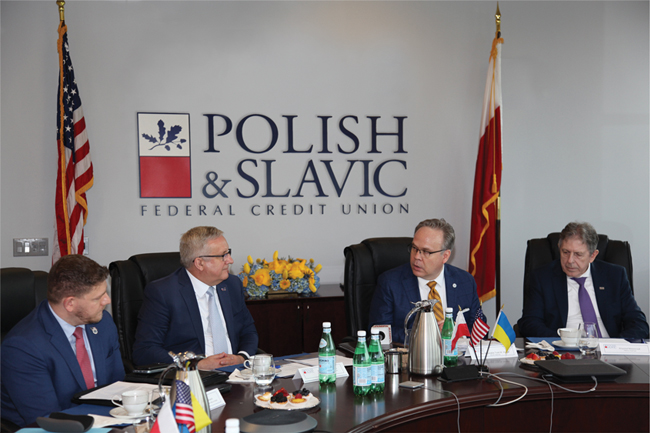 Meeting attendees included representatives of the PSFCU Board of Directors and Executive Management, and representatives of Ukrainian and Ukrainian-American credit unions: Anatoli Murha, SVP of Ukrainian Self Reliance FCU in Philadelphia, Andrew Horbachevsky, Chairman of SUMA FCU & NY and Ukrainian American Credit Union Association, Bohdan Kurczak, President/CEO of Self Reliance FCU in New York, and Svitlana Savchenko, Representative of the Ukrainian National Credit Union Association. Consuls General of the Republic of Poland and Ukraine, Adrian Kubicki and Oleksii Holubov were also in attendance, as were Vadim Tkachuk, Economic Affairs Consul of Ukraine, Michael E. Fryzel, former Chairman and Board Member of NCUA and Bruce Foulke, President/CEO of American Heritage FCU in Philadelphia.

The meeting attendees discussed the difficult situation Ukraine found itself in following the unprovoked Russian aggression, especially the tragic loss of life, the destruction of the infrastructure and its effect on the country’s economy. They stressed the continuous need for efficient support and assistance both on the part of people and on the part of organizations such as the credit unions. They also praised PSFCU for the humanitarian efforts in response to the outbreak of war in Ukraine. 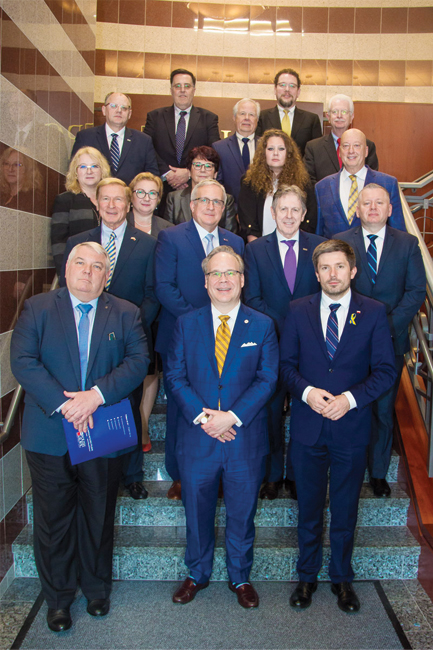 In his remarks, Mr. Harper, who underscored his Polish ethnic heritage ties, commented on the success of PSFCU and its support of the Polish-American community. He also praised PSFCU’s efforts to provide assistance to Ukrainian refugees. „The Polish and Slavic Federal Credit Union exemplifies the proud tradition of credit unions, which from their beginning in the U.S. more than a century ago, have been based on the principle of people helping people,” he said. “I was deeply impressed when I heard the Polish and Slavic Federal Credit Union, in partnership with the John Paul II Foundation, has raised more than $330,000 to provide direct assistance to Ukrainian refugees in Poland.”

During the discussion that followed, Mr. Harper was asked to what credit unions should pay special attention in the current situation. He underscored the particular need of cybersecurity and the threat of cyberattacks on credit union infrastructure on the part of the Russian hackers. “We have now put out a couple of alerts to credit unions. We’re urging them to be hyper vigilant at this time because attacks are potentially imminent.” He also encouraged credit unions to take full advantage of NCUA’s Automated Cybersecurity Examination Tool (ACET) framework.