An award ceremony for winners of the Grand Anniversary Random Prize Drawing was held on Wednesday, November 28, at the Polish & Slavic Federal Credit Union’s headquarters located at 100 McGuinness Blvd., in Greenpoint. Our Credit Union was represented by members of the PSFCU Board of Directors – Ms. ElÅ¼bieta Baumgartner and Ms. Marzena Wierzbowska – as well as our CEO Bogdan Chmielewski, Chief Lending Officer David West, Vice President of Marketing Marian Ponanta and McGuinness Branch Manager Tomasz Kwiatkowski. The ceremony was also attended by journalists representing the Polish media.

After a brief introduction, prizes were handed out to the respective winners, each of whom had an opportunity to say a few words about themselves and about their relationship with our Credit Union. 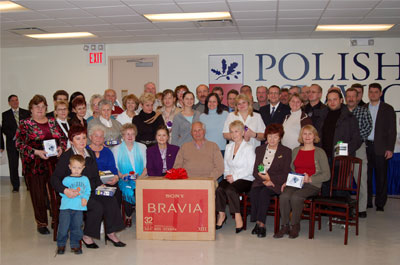 Prize Drawing winners with representatives of our Credit Union

It’s worth reminding that the Drawing included thirty prizes in each of the three categories, plus one Grand Prize – hence the name “30 x 3 (plus 1).” The Drawing was open exclusively to members of our Credit Union who, as of October 27, 2007, met eligibility requirements described in official Drawing rules and regulations:

All PSFCU members had an opportunity to take part in the drawing of the GPS receivers, iPods and cameras by filling out entry cards available in every branch (in all, 604 people entered the Drawing in this manner.)

The Drawing, which was heavily advertised on television, radio, in the press, in Credit Union branches (including the Unia TV program) and in our quarterly UNIA bulletin, was held on October 31 under the supervision of an independent auditor from McGladrey & Pullen LLC auditing firm. During the Drawing, 1 Grand Prize winner and 90 other winners were selected. In addition, a list of alternative winners was drawn in case one or more winners were found ineligible (e.g. if he or she proved to be an employee of our Credit Union or a family member of such employee) or failed to claim the prize within the prescribed timeframe.

In accordance with the regulations, winners were notified by mail and by phone. Those who could not attend the ceremony will be able to collect their prizes at our Credit Union branches after notifying our Marketing Department by calling 973-808-3240 ext. 6132. Winners who do not answer the notifications by December 12 will forfeit their prizes, which will then be awarded to persons from the “alternative” winners list selected in the course of the Drawing.

At the end of the pleasant evening, our guests also had an opportunity to learn about our newest online banking services. A brief information on the subject was presented by Ms. Agata Król, PSFCU Training/Education Manager.

Commenting on the events, Mr. Bogdan Chmielewski said: “The Prize Drawing not only gave us an opportunity to express our gratitude to all our Members for their loyalty, but also provided a platform to promote our business, checking and IRA accounts. One of the numerous positive aspects of the Drawing was the significant positive growth in each of the “prize” categories: we noticed an increase both in the numbers of checking, business and IRA accounts as well as the amounts deposited to these accounts.”

The idea of funding the Prize Drawing originated with the Board of Directors, particularly on the recommendation of the 30-th Anniversary Celebration Committee (which included Ms. MaÅgorzata WÄdoÅowska, Ms. Krystyna Myssura and Mr. Wojciech Mleczko.) The decision was made to award the prizes in the course of a drawing held in accordance with the laws of the state of New York.

Ms. MaÅgorzata WÄdoÅowska, Chairwoman of the 30-th Anniversary Celebration Committee, said: “The Prize Drawing clearly demonstrates that our Credit Union is constantly striving to create positive things for our members. The money invested in the awards is money well-spent: it helps us show that our Credit Union is more than a normal bank – we aim not only to provide our community with the best financial services but also to provide tangible support for it. The difference between a bank and a credit union is very important here – banks are not interested in what happens to their clients while for us, our members constitute a part of our family.”

Since our Credit Union is obliged to protect confidentiality of personal data, we can only publish the names of those winners who gave their express approval. The following persons did so thus far: