The Brooklyn-based Polish & Slavic Federal Credit Union expanded its national footprint this week with the opening of its first Pennsylvania branch, a 1,500-square-foot location in the Pocono region’s Stroudsburg, PA.

PSFCU cut the ribbon on its state-of-the-art branch, Jan. 19, with the assistance of local politicians, state senators, schoolchildren from the Pope John Paul II Polish School (East Stroudsburg) and more than 100 local Polish-Americans.  The new branch marks PSFCU’s 19th total branch, and its fourth state in which it operates, joining New York, New Jersey and Illinois. The credit union said the new branch will generate 5 jobs to start, and will likely grow as it attracts more local members. 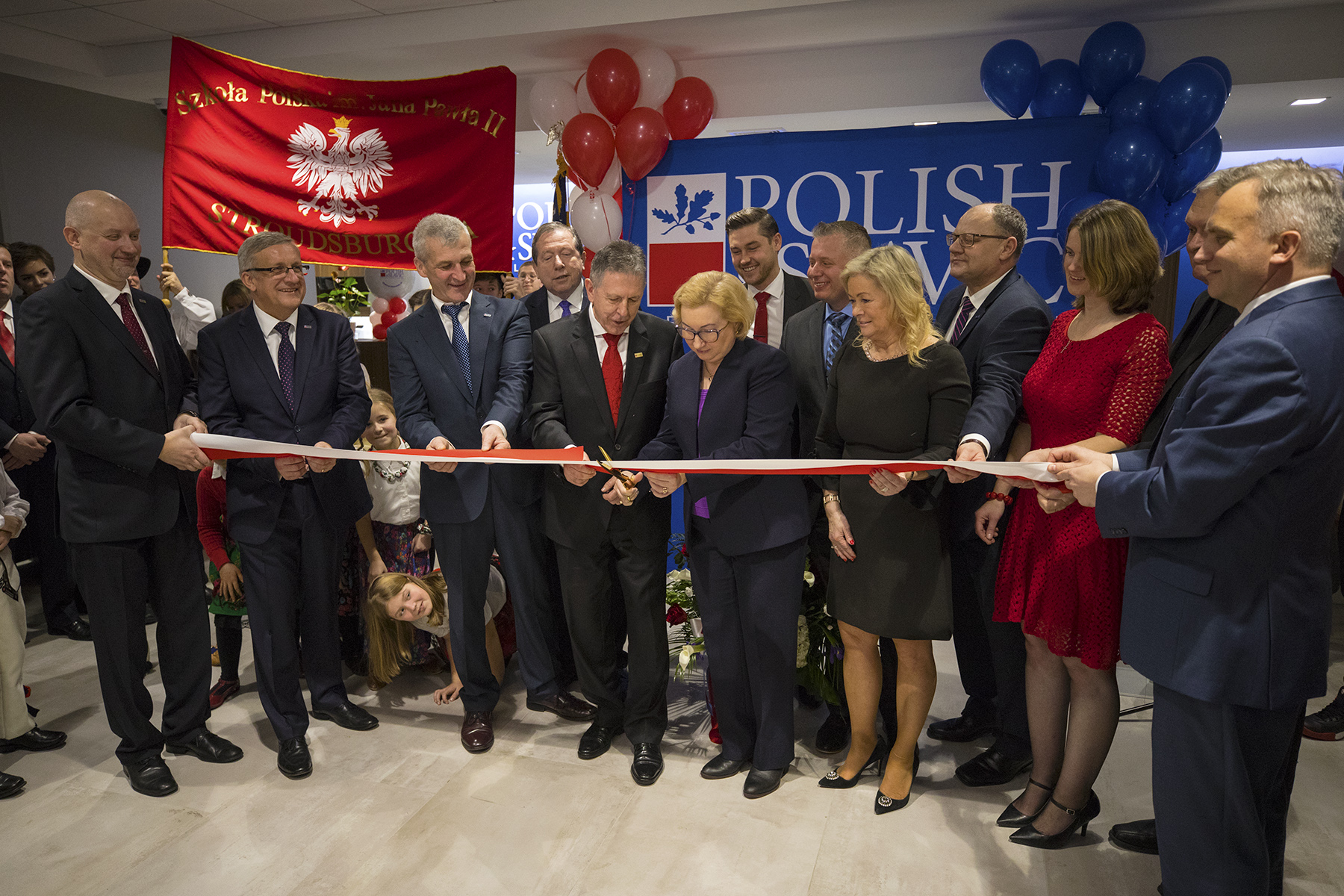 PSFCU Board of Directors members and managers cut the ribbon.

“This is our 19th branch, and our first one in the great state of Pennsylvania.  We also hope it won’t be our last one in the Keystone State,” said Bogdan Chmielewski, CEO of PSFCU.  “Trust is the foundation of our credit union, and the nourishment of these trusting relationships with members is what paves our roads to success.  Today, our journey has led us to cross the Delaware, and we’re expecting a successful first step in Stroudsburg.”Over the past few years, an increasing number of Polish-Americans have moved to the Poconos region, thereby creating a desirable opportunity for PSFCU, the nation’s largest ethnic credit union. 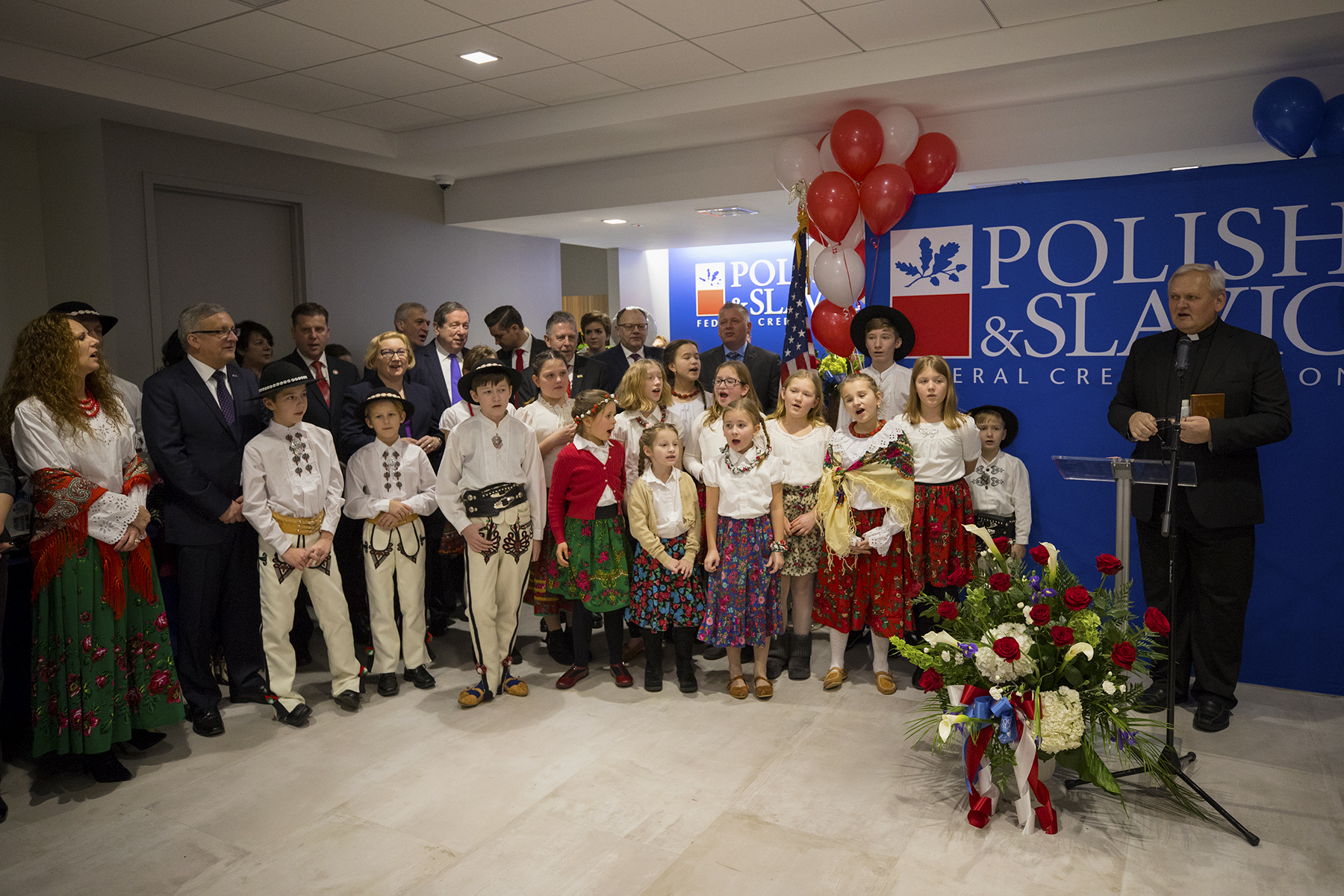 Prior to the grand opening, Pennsylvania State Senator Mario Scavello presented PSFCU with a Certificate of Recognition that lauded the credit union’s commitment to community and philanthropy, and its past history of providing economic opportunity to individuals and businesses within the communities it serves. “I know that Poles are a group of good hard workers—we see this standing here today.  I thank PSFCU for its philanthropic commitment and investment in Stroudsburg. I wish you great success,” said Sen. Scavello while attending the ribbon cutting ceremony. 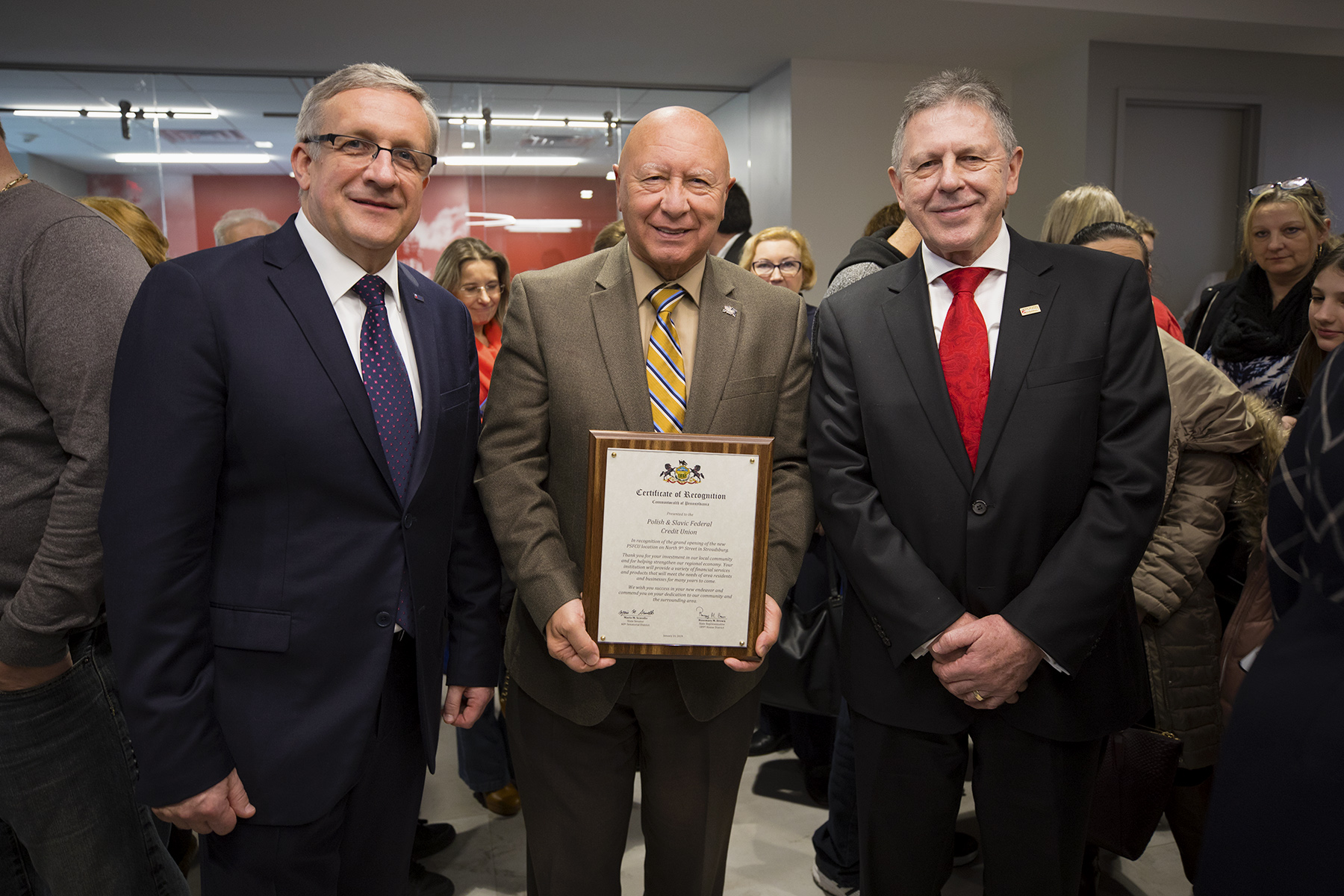 PSFCU’s philanthropic commitments have been fundamental to its success within its communities.  During the grand opening ceremony, Mr. Chmielewski and Krzysztof Matyszczyk, the credit union’s chairman of its Board of Directors, presented a $10,000 check to Hanna Czuma, director of the John Paul II Polish School. In addressing the school’s director, Mr. Matyszczyk said: “We are firm believers in supporting the Polish-American community by engaging in a variety of organizations and staying involved.  I wish you all the best and hope that we continue to thrive and help each other.” 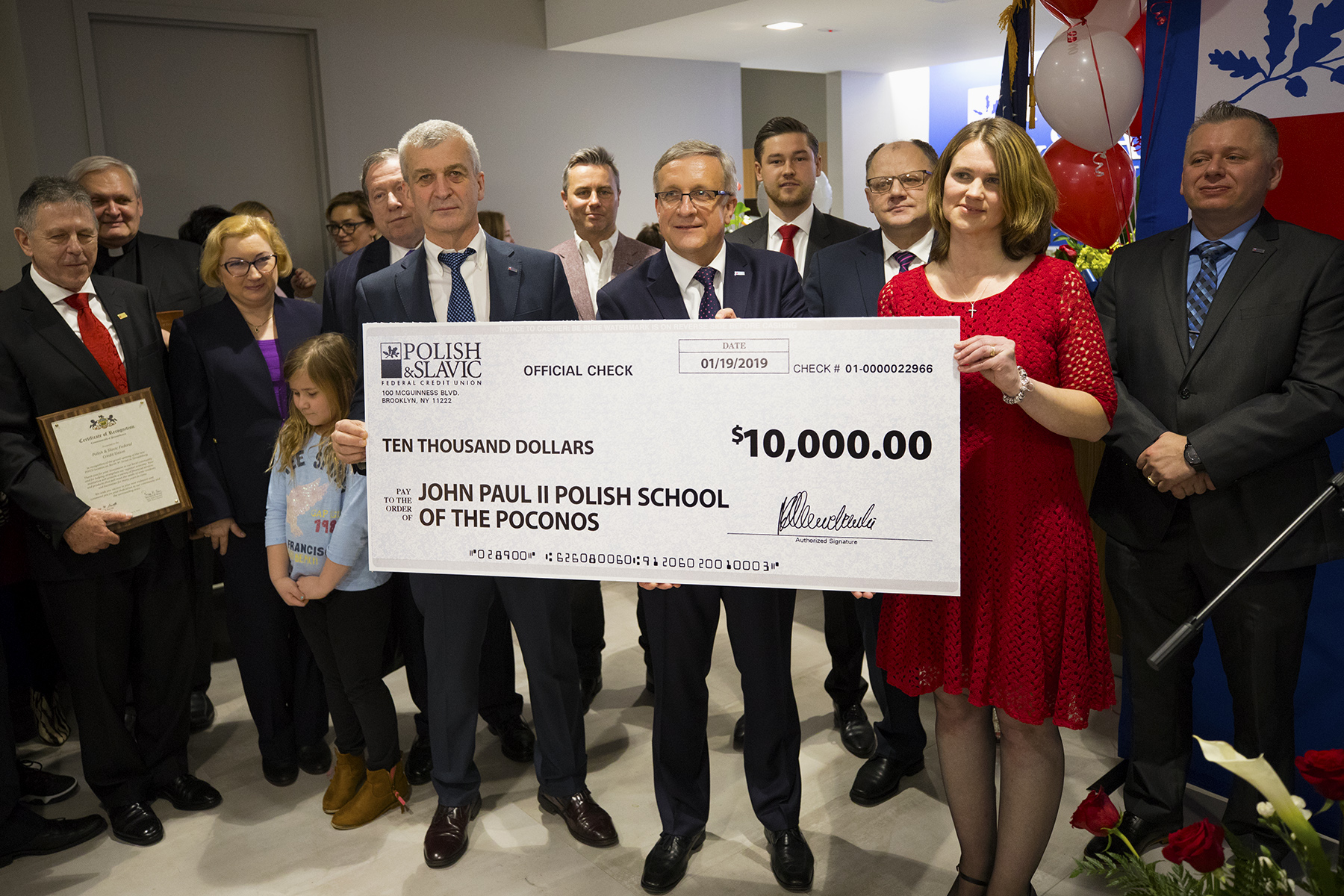 “We welcome the union with unity. On behalf of all teachers, students and parents, I would like to thank the Polish & Slavic Federal Credit Union for so generously supporting our school.  We opened the doors to our school in 2006 and couldn’t be more excited that PSFCU has finally arrived in Stroudsburg!” said Ms. Czuma. 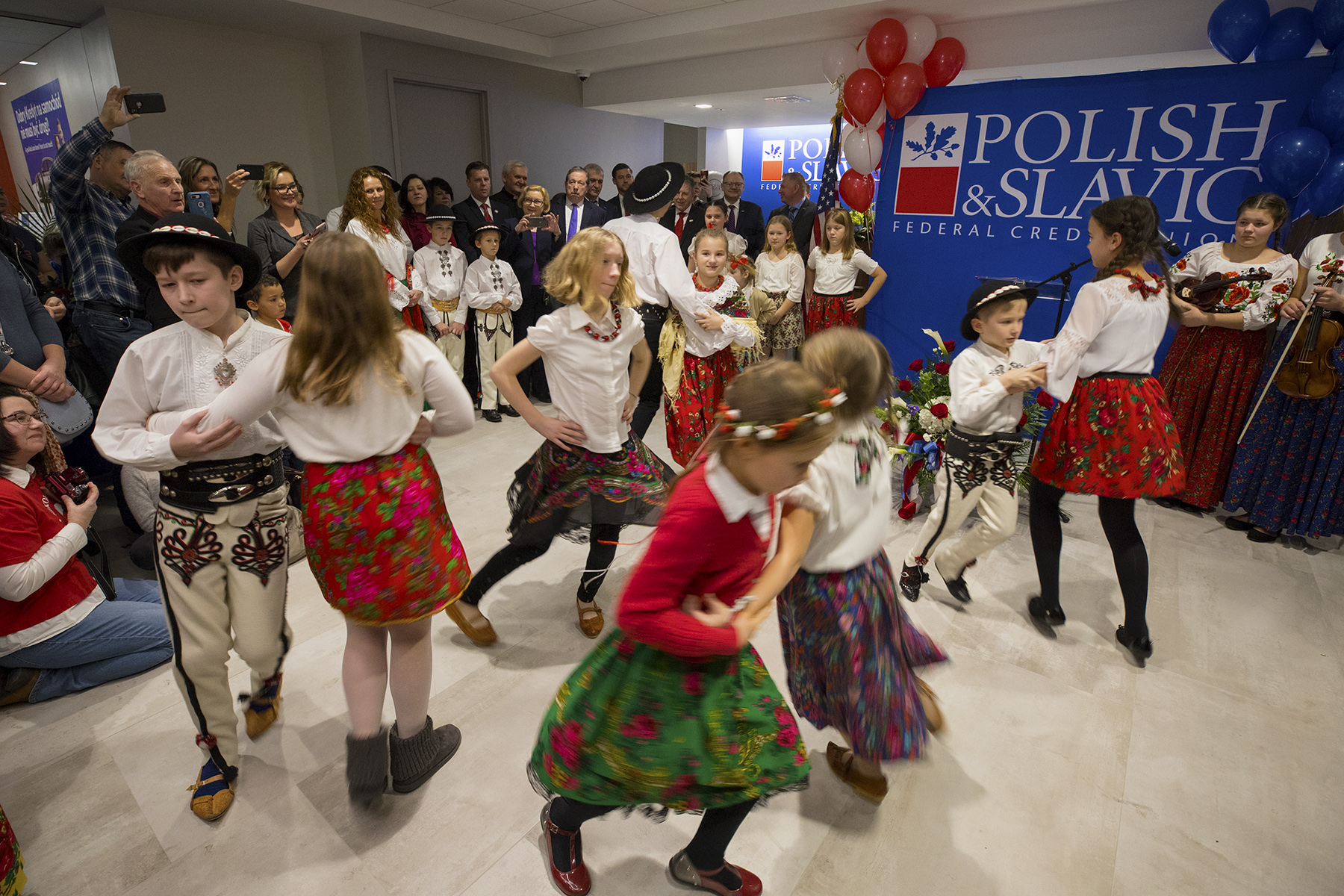 The new branch is located at 334 North 9th Street in Stroudsburg, PA.  PSFCU has been granting mortgages and loans for nearly a decade to Pennsylvania residents, but now with a physical branch located in the state, it will be able to offer a plethora of products and services enjoyed by all members. 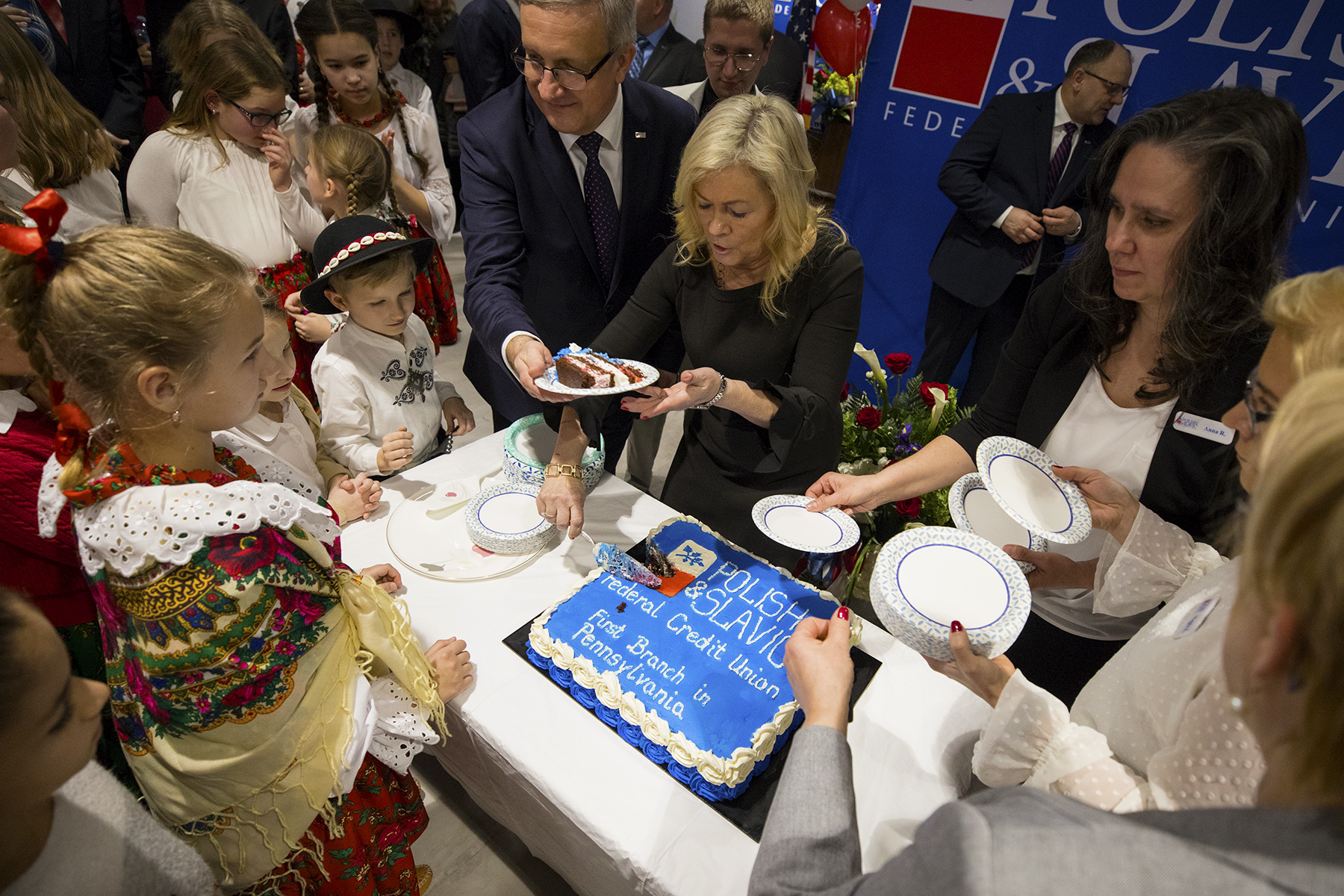 A piece of cake for everybody!