Home > About Us > News > Polish-American Gala in Washington, DC

To honor Poland’s 100th anniversary of regaining its independence, the Polish & Slavic Federal Credit Union is proud to have been a part of organizing a prestigious celebratory gala at Washington’s Mayflower Hotel.  During the event, retired General David Petraeus, former CIA Director and Commander of the International and U.S. troops in Afghanistan and Iraq, received honorable mention awards to honor and celebrate Poland’s independence.

Upon receiving his award, General Petraeus, expressed his appreciation of Poland’s honoring its commitment to fulfill its NATO obligations.  He further stated, half-jokingly, that he was “the only American General who commanded units of the Polish Army in two wars” (Afghanistan and Iraq).  A radio correspondent inquired about the legitimacy of establishing a permanent U.S. military base in Poland to which General Petraeus responded, “I think that establishing a base to improve logistical and training capabilities as well as conditions for soldiers would be quite sensible.”  General Petraeus went on to elaborate that the current rotational presence of U.S. troops in Poland is de facto a permanent presence, insinuating that there is a possibility of establishing a permanent American base in Poland. 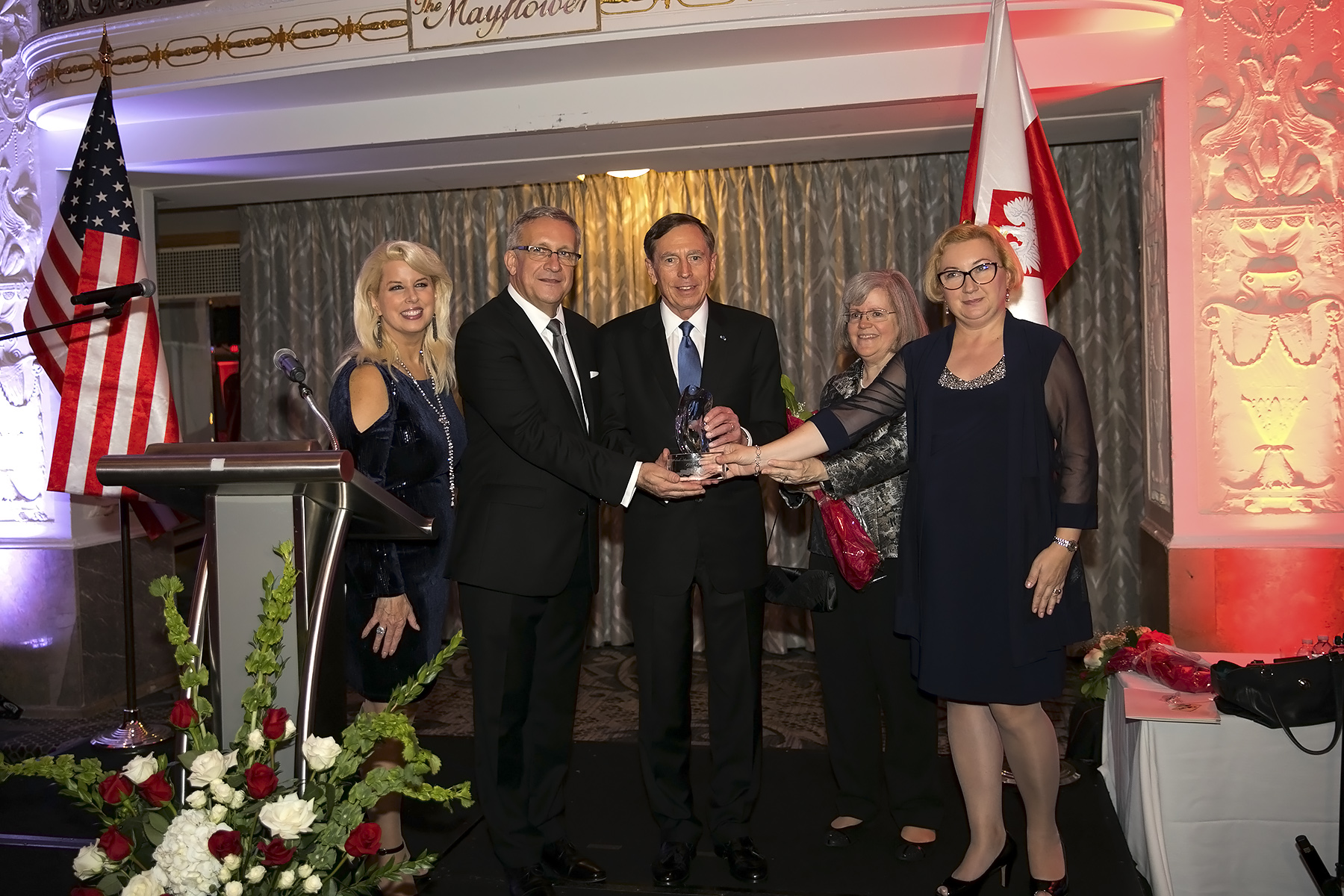 The gala was a great success thanks to the Polish & Slavic Federal Credit Union, the Polish Supplementary School Council of America, the Jozef Pilsudski Institute of America, the Kosciuszko Foundation—all leading ethnic organizations from New York and New Jersey—as well as Chicago’s Copernicus Foundation.  Rita Cosby, a renowned TV-reporter, held the honors of hosting the event, making it an even more special evening given that her father, Ryszard Kossobudzki, was a soldier of the Home Army as well as a participant of the Warsaw Uprising.  Furthermore, Adam Kwiatkowski (Minister of the Office of Polish President Andrzej Duda) and Prof. Piotr Wilczek (Polish Ambassador in Washington) delivered speeches during the celebration.  Other guests included pianists Jerzy Stryjniak and Nicolas Kaponyas, the Szafranski Sisters trio from Chicago, and New York’s Polish-American Folk Dance Company, who out on wonderful performances throughout the evening. 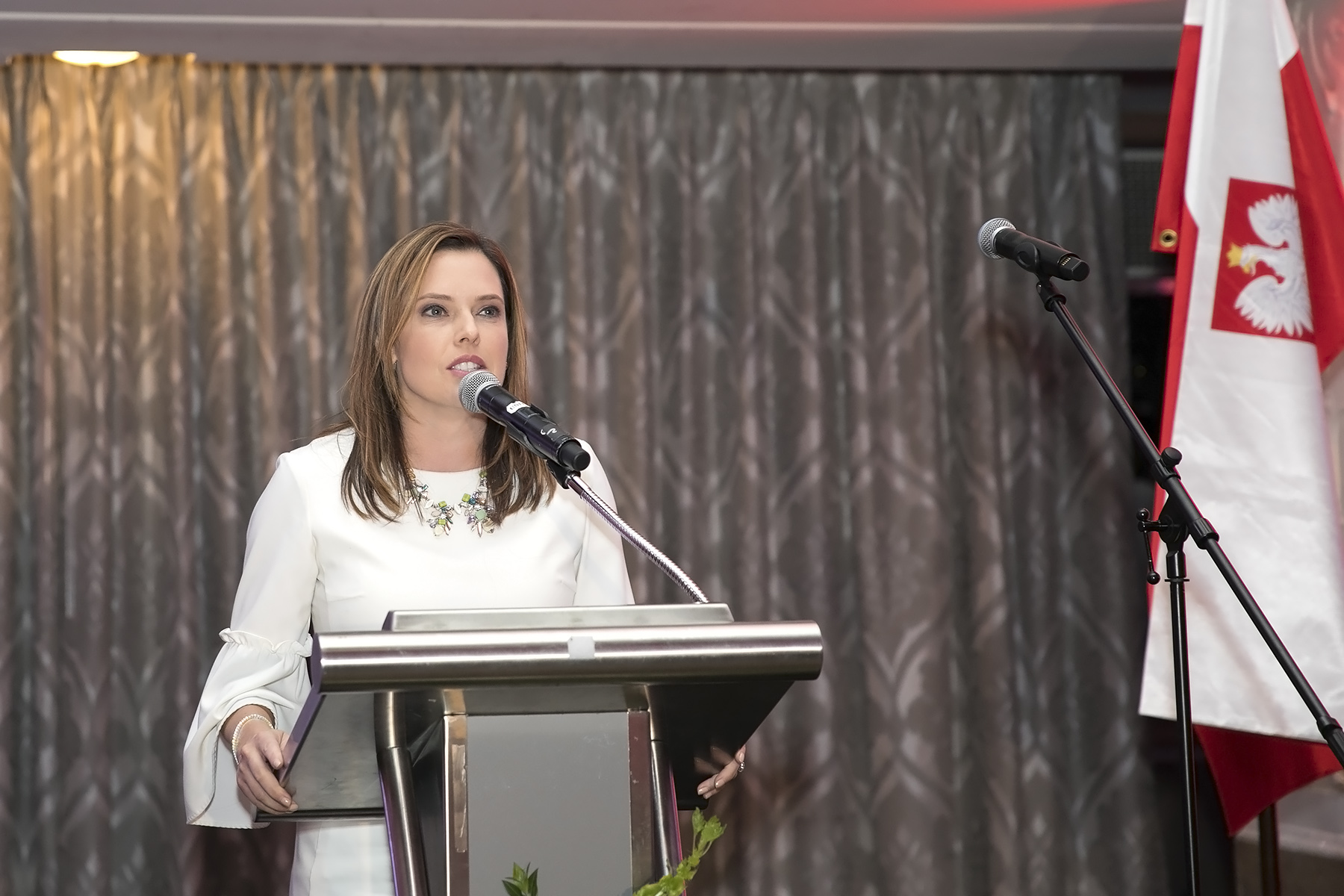 Communications Director Mercedes Schlapp also attended the gala as a representative of the White House stating that “President Trump loves Poland and values the Poles’ attachment to freedom.”  Ms. Schlapp is a descendant of an immigrant Cuban family who escaped Fidel Castro’s dictatorship by fleeting to America.  She emphasized that she’s always been fascinated by the “anti-communism of the Poles” as well as the teachings of John Paul II, “a saint who is very close to [her].”  Bret Baier, a FOX news journalist and author of the daily evening “Special Report” news program, also attended the gala.  Mr. Baier, being of German and Irish origin, has reported on Poland nearly throughout his entire career and said that “President Trump’s speech in Warsaw is one of the most significant speeches the President has ever made.”  Mr. Baier, being the highly esteemed journalist that he is, eloquently stated that Poland has a “very important role” to play in its region of the world and that “[He] can promise you that we will continue to report on Poland as we have been doing in my program.”