Home > About Us > News > Christmas Wafer Sharing at PSFCU

As every year in early December at the headquarters of the Polish & Slavic Federal Credit Union in Brooklyn NY, our volunteers, management, employees and friends celebrated the upcoming Christmas holidays and wished each other a happy New Year. According to tradition, we broke the Christmas wafer, exchanged best wishes and sang Polish carols together.

This year our building at 100 McGuinness Boulevard in Greenpoint was honored by the presence of distinguished guests such as Minister Adam Kwiatkowski, Chief of Cabinet of the President of Poland Andrzej Duda, Prof. Piotr Wilczek, Polish Ambassador to the United States, Piotr Janicki, Polish Consul General in Chicago, Maciej Golubiewski - soon to assume the post of Polish Consul General in New York, Auxiliary Bishop of the Diocese of Brooklyn Witold Mroziewski, Monsignor Tomasz Grysa , First Secretary of the Holy See to the United Nations, and Prof. John Lenczowski, founder of The Institute of World Politics in Washington DC. 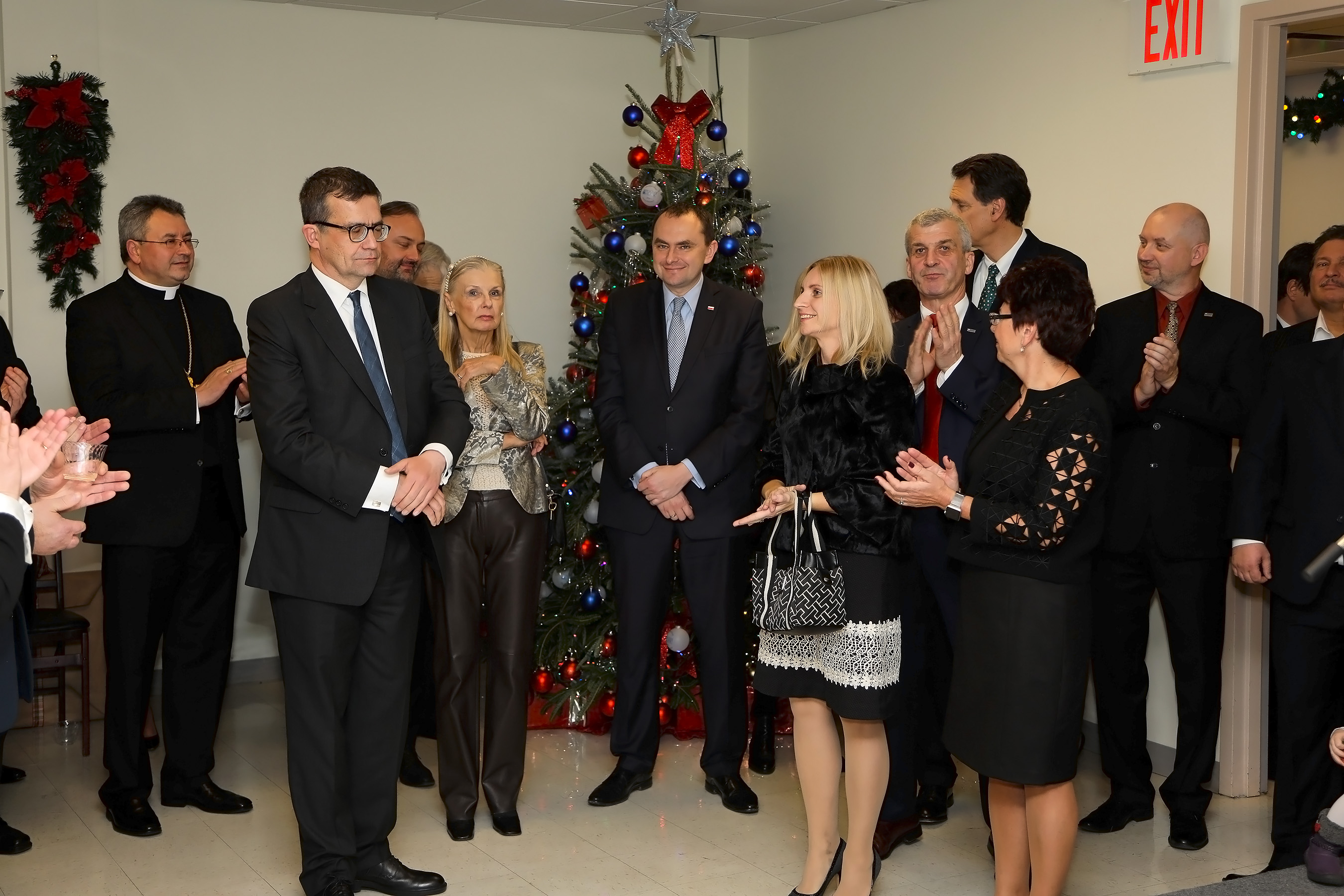 Minister Adam Kwiatkowski, Chief of Cabinet of the President of Poland Andrzej Duda

“I am here because it is a matter of fact that no important Polish community events on the United States East Coast or in metropolitan Chicago take place without the involvement of PSFCU. On behalf of the President and on my own behalf, I would like to sincerely thank you for that involvement,” said Minister Adam Kwiatkowski, Chief of Cabinet of the President of Poland Andrzej Duda. Minister Kwiatkowski recalled that in September of this year, he visited the PSFCU with Polish First Lady Agata Kornhauser-Duda, awarding seven longtime employees of our Credit Union with the Cavalier Cross of the Order of Merit of the Republic of Poland. 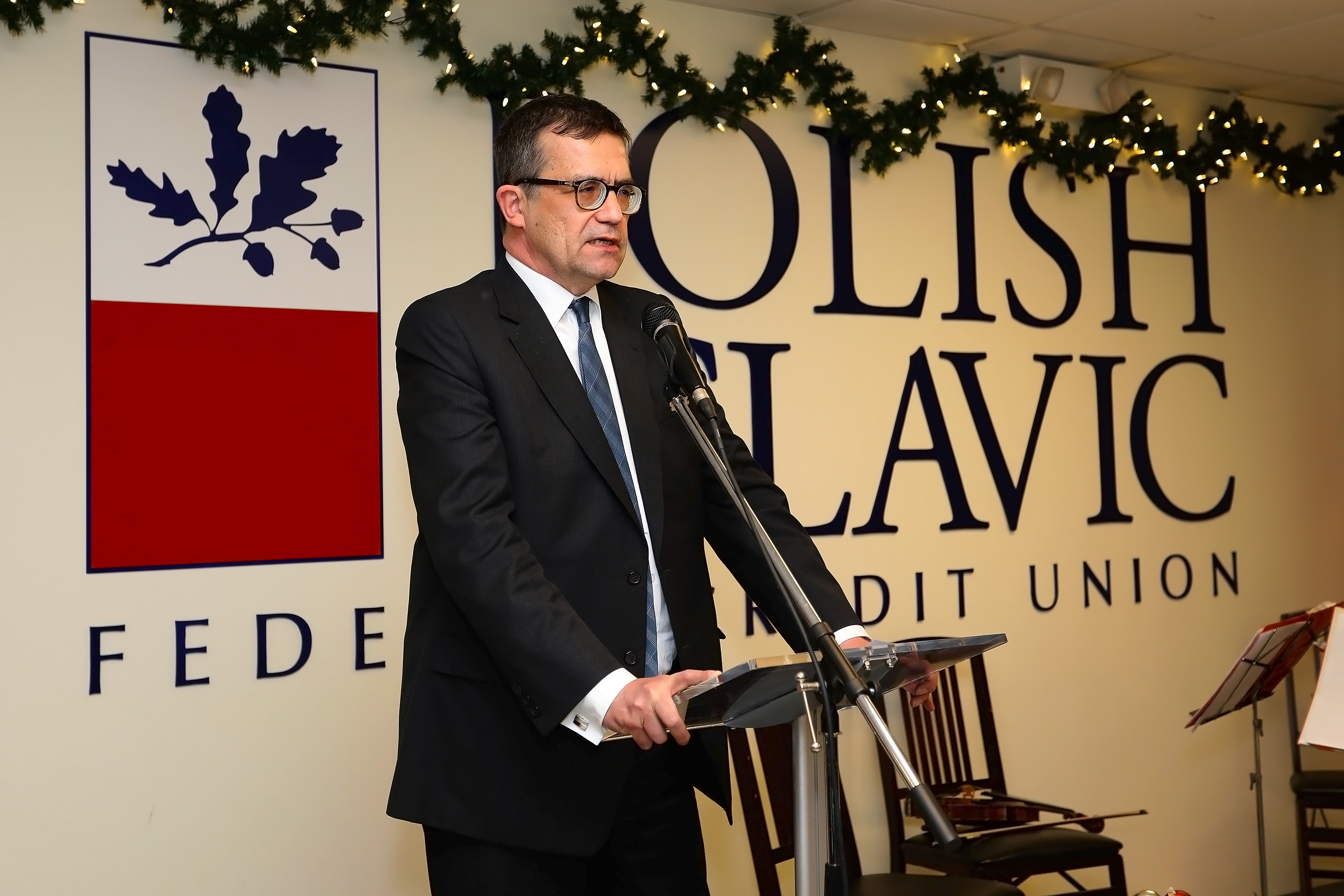 “It is no coincidence that I have come to the Polish & Slavic Federal Credit Union on my first official visit in the Polish community.” said Prof. Piotr Wilczek, who recently became the Polish Ambassador in Washington. The Ambassador reminded everyone in attendance how important a task it is for the Polish-American community to nurture the “good name of Poland". 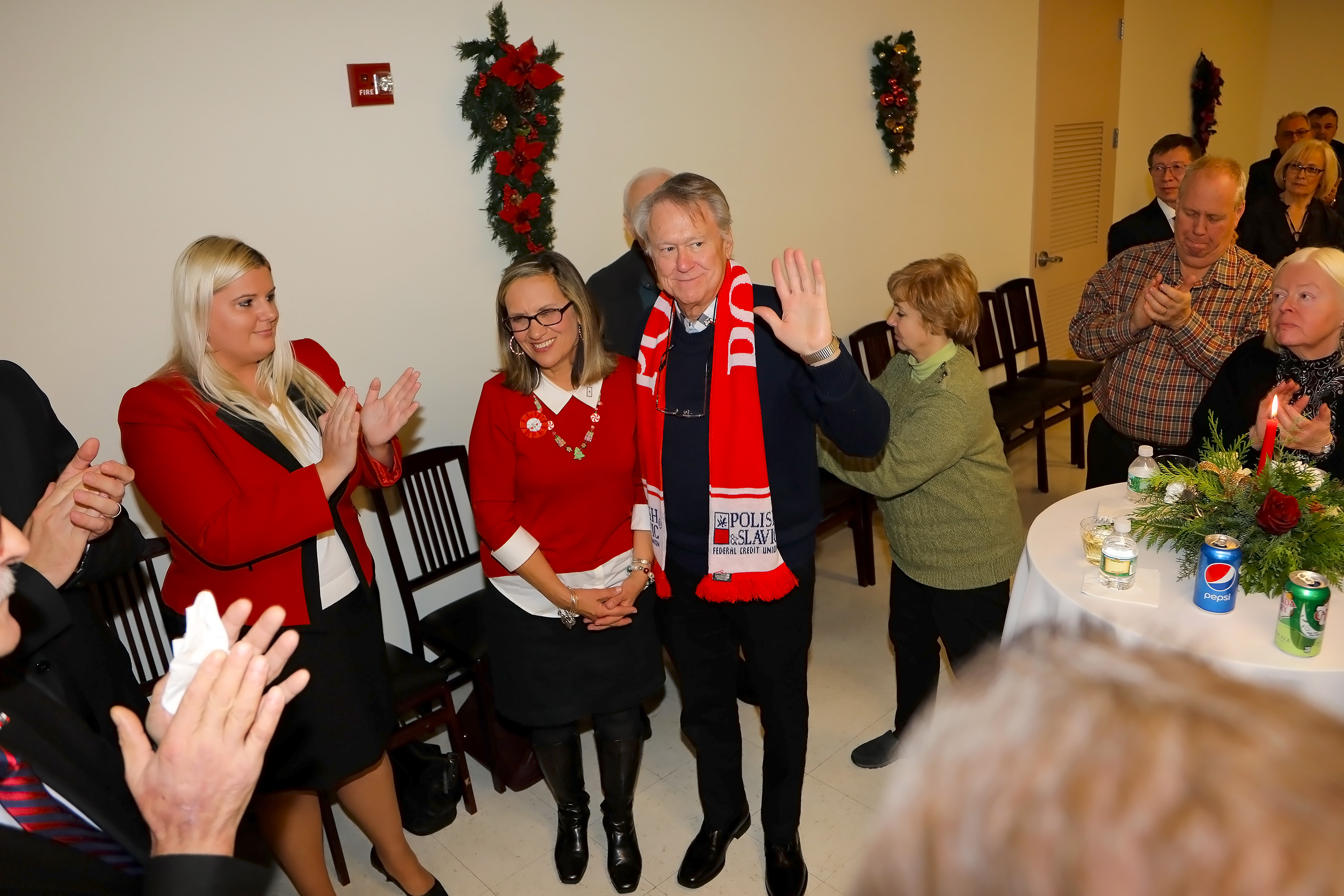 Guests also included Linda and Bob Ollis, the parents of deceased US Army Staff Sergeant Michael Ollis, who gave up his life when rescuing a Polish officer in Afghanistan in August 2013. Bob Ollis pointed out that, although that was the first time they had ever seen each other, his son and Lieutenant Karol Cierpica repulsed a terrorist attack arm in arm, and “they did more in 15 minutes than the United Nations had done in its entire history”. “August 28, 2013, was a tragic day for us. But God works in mysterious ways, and on that day we became part of the Polish community, the white and red family,” said Bob Ollis. 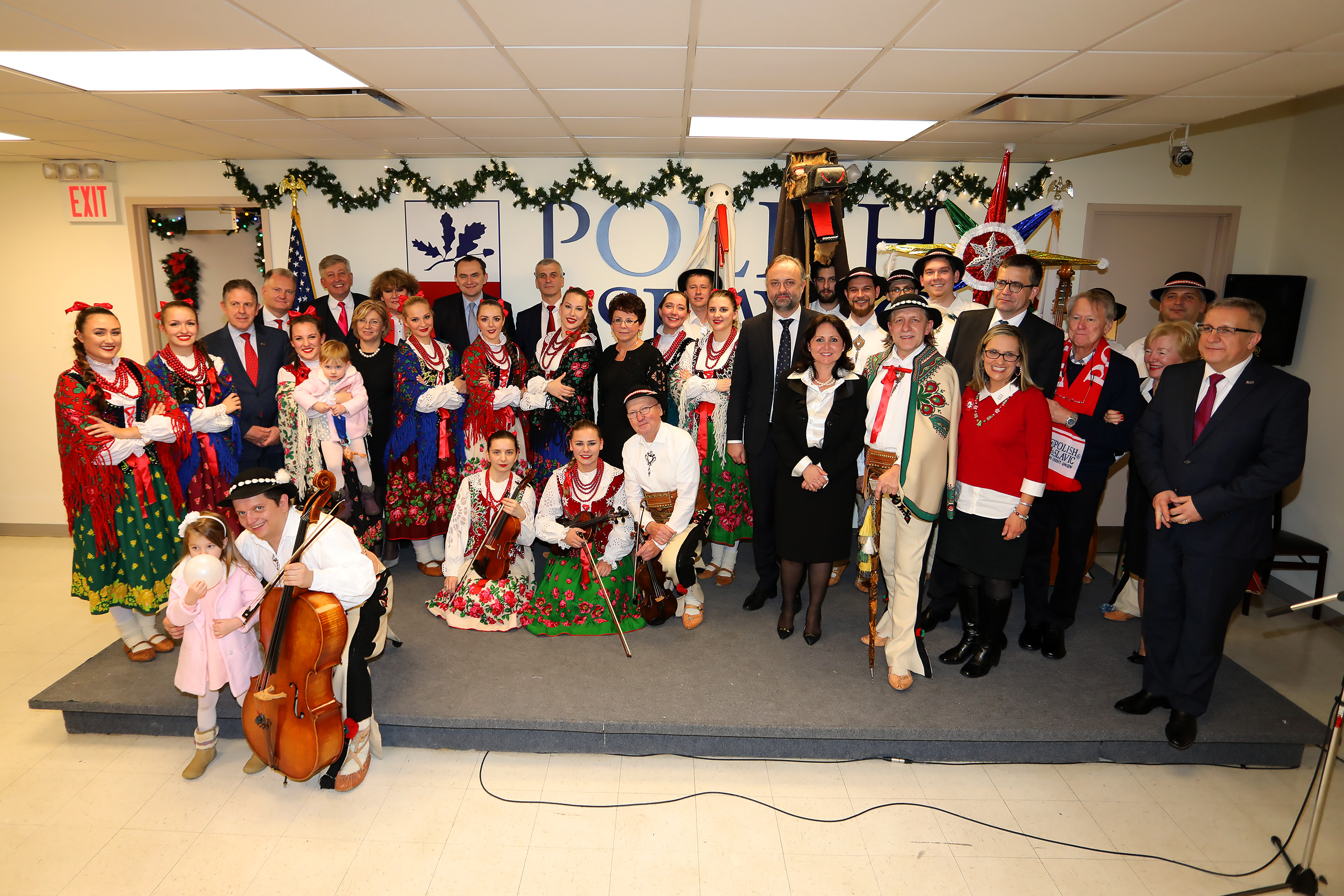 The blessing by Bishop Witold Mroziewski was followed by the sharing of the Christmas wafer, which was distributed to those in attendance by members of the PSFCU Board of Directors and Supervisory Committee. At the end of the wafer-breaking ceremony, the Polish-American Folk Dance Company presented Polish Christmas melodies sung by carolers dressed as Polish mountain folk. 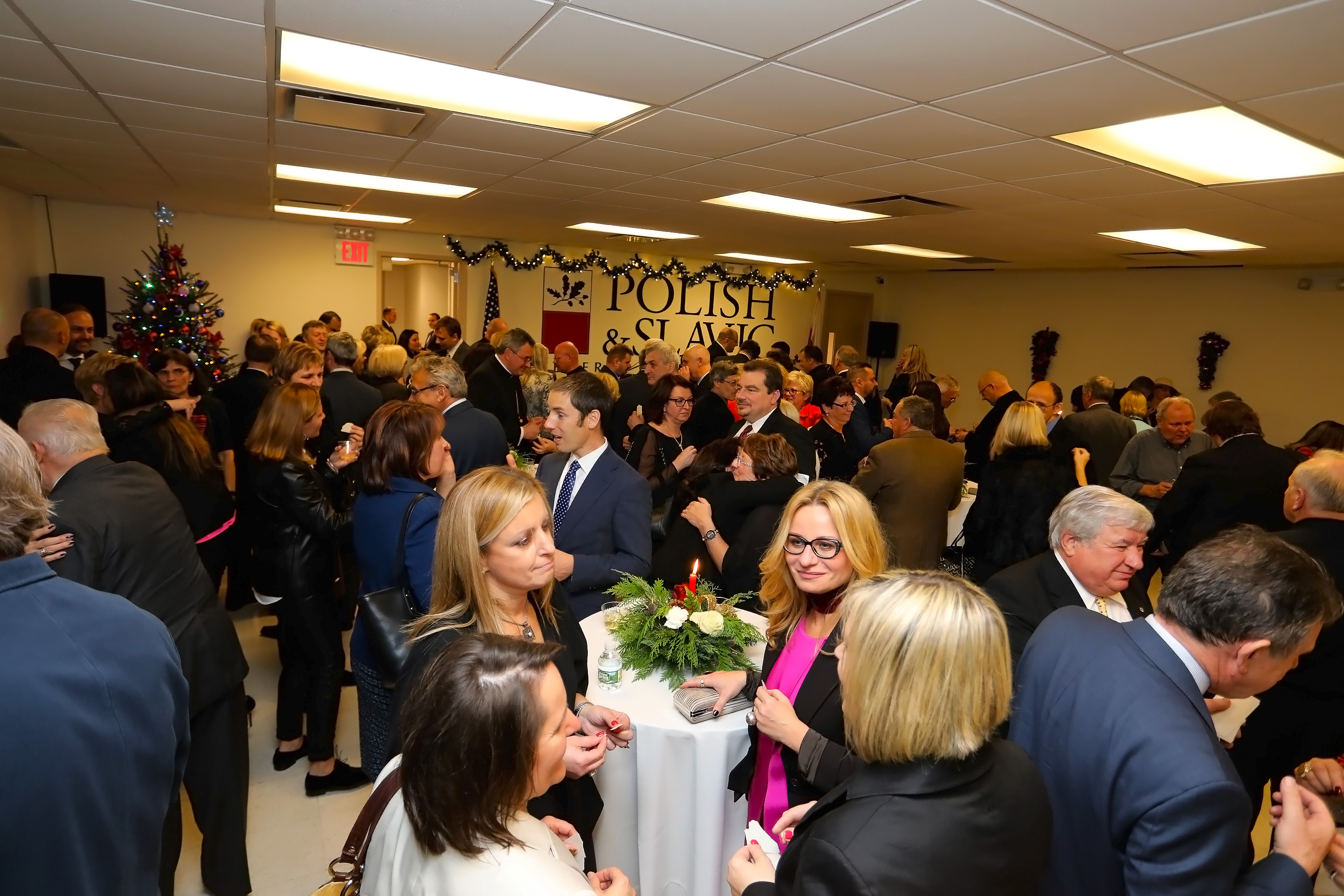