Over $151,000 was raised for three children’s hospices in Poland and for needy Polish-American children as a result of the “Children's Holiday Smile” fundraising campaign organized by the Polish & Slavic Federal Credit Union (PSFCU) and the Polish-American Children’s Smile Foundation.

Such a good outcome of the “Children's Holiday Smile” campaign was possible due to the great dedication of employees and members of the Polish & Slavic Federal Credit Union in New York. The involvement of donors was beyond the organizers’ expectations: under the campaign, PSFCU members donated exactly $151,540.60 to help sick children. The Polish & Slavic Federal Credit Union, headquartered in New York, is the largest Polish financial institution outside of Poland. It has over 82,000 members and 15 branches in the USA, and its assets amount to over $1,600,000,000. 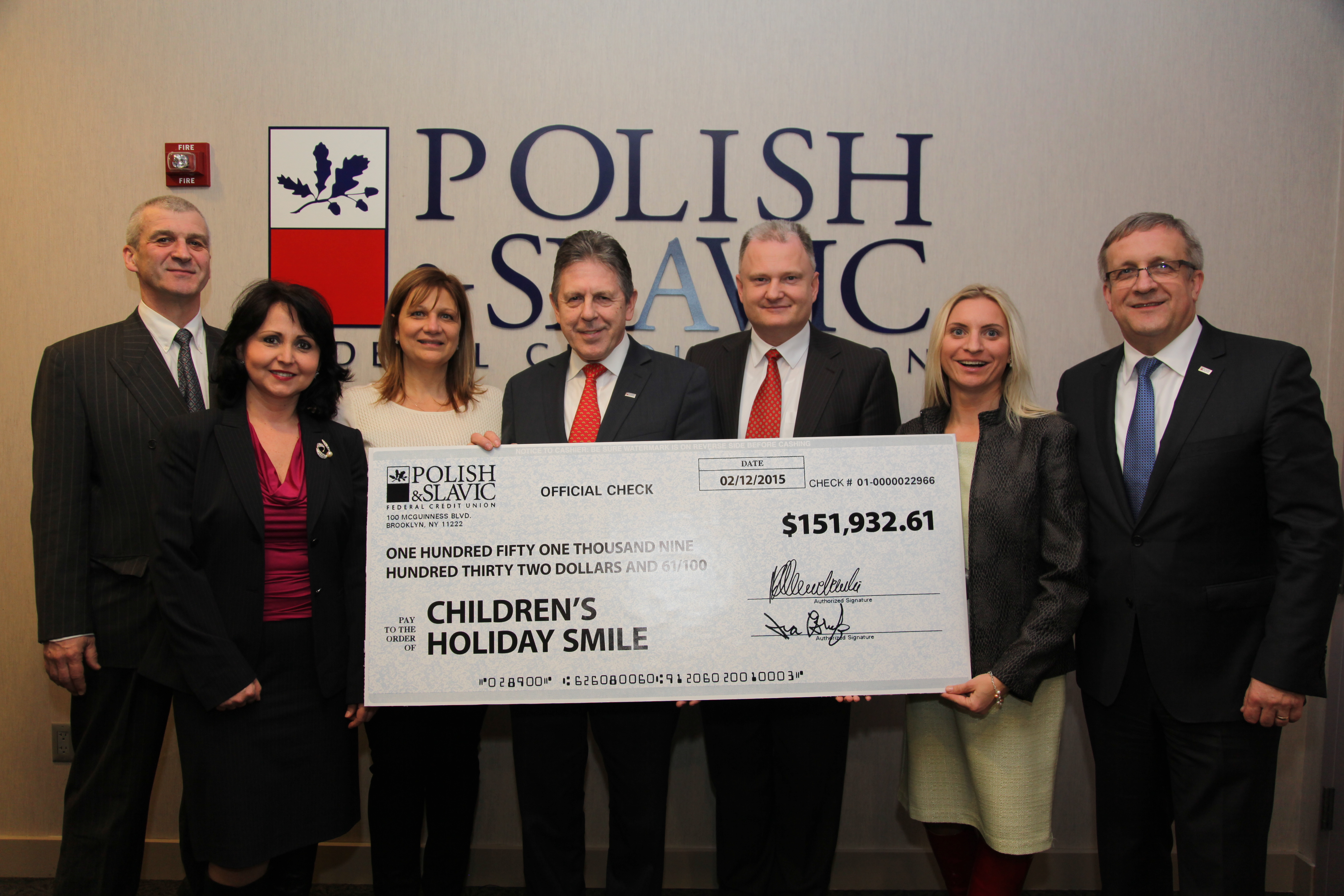 “Our Credit Union is the equivalent of the community savings and loan associations operating in Poland. The “Children's Holiday Smile” charity drive fits in perfectly with our institution’s mission: to provide financial services of the highest quality while supporting the community in which we live and work, and to help those most in need. We have been operating in the Polish community for nearly forty years, and our members include many of people of good will who are willing and able to share with those in need,” noted Krzysztof Matyszczyk, Chairman of the PSFCU Board of Directors. The “Children's Holiday Smile”fundrising campaign conducted by the PSFCU along with New York’s  for Children’s Smile Foundation lasted from late November to January 10. Money could be donated at all 15 PSFCU branches in New York, New Jersey and Illinois, as well as electronically via Internet Banking. Any donation was accepted, with some PSFCU members donating several hundred or even a thousand dollars. “The amount raised exceeded all expectations,” emphasized Bogdan Chmielewski, PSFCU Chief Executive Officer and initiator of “Children's Holiday Smile”. “Raising more than $151,000, the equivalent of almost 550,000 zlotys at the current exchange rate, is a tremendous joint success of our Credit Union and the entire Polish community. 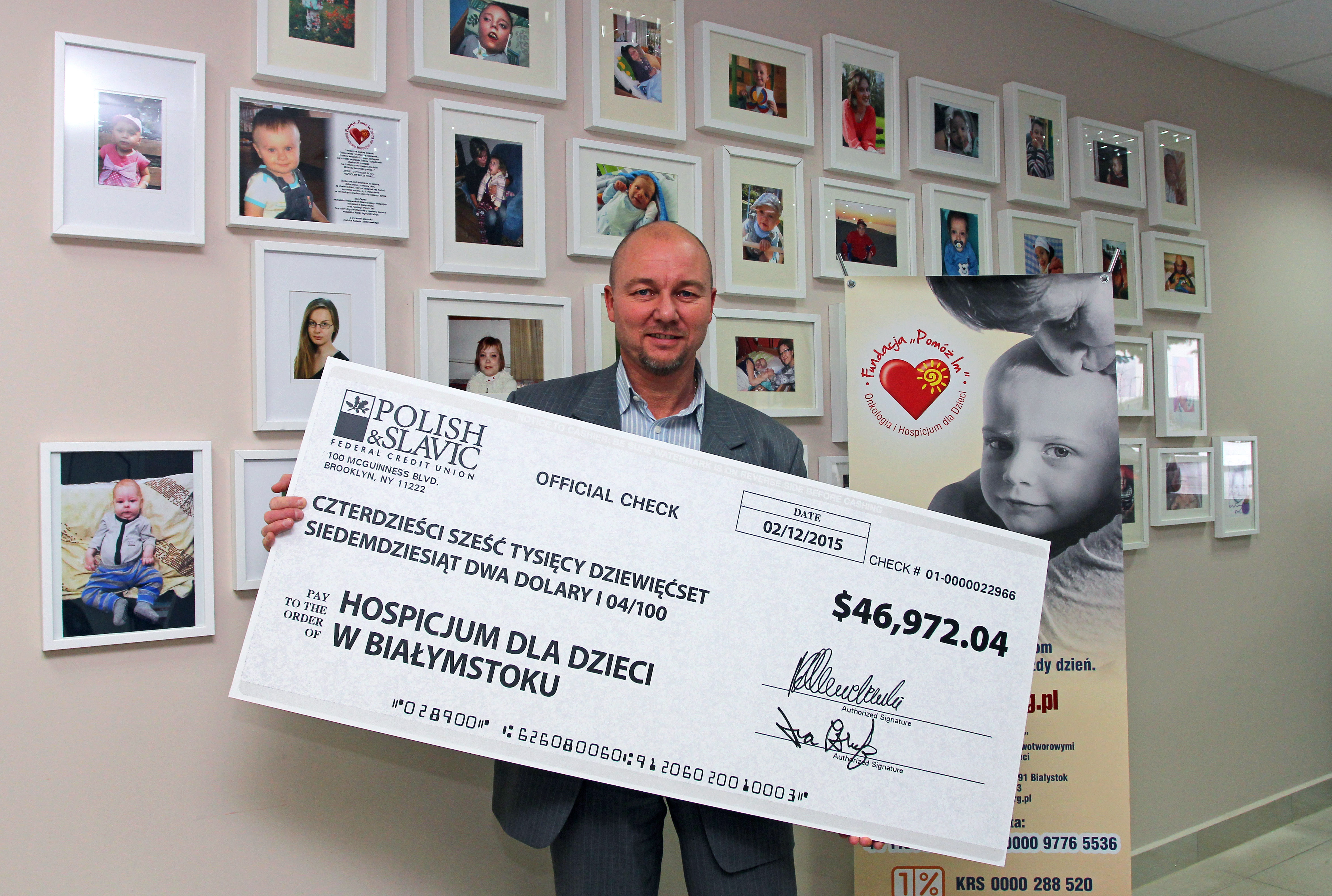 The funds obtained have been transferred to the bank accounts of three Polish hospices:
- Bialystok’s “Help Them” Foundation for Children with Cancer and Children’s Hospice, which cares for terminally ill children from Podlasie Province. The hospice helps children during treatment and those with a history of cancer and provides free in-home palliative care for children who do have no chance of recovery (the equivalent of $46,972.04);
- Rzeszow’s Subcarpathian Children’s Hospice Foundation, which is the first in-patient hospice for children only. Children under the age of 18 are surrounded by the 24-hour care of nurses and doctors. The in-home and in-patient hospice cares for people over 18 whose illness began in childhood (the equivalent of $54,783.27);
- and Krakow’s Rev. Jozef Tischner Memorial Children’s Hospice, which provides in-home assistance to terminally ill children. This is the oldest in-home hospice in Malopolska Province. Currently there are 46 children and their families under the care of this hospice (the equivalent of $36,189.61).
The donated funds will be used primarily for the purchase of medical equipment and items needed for the care of sick children, from new bedding and diapers, to toys, furniture and food. And the money donated to the bank account of New York’s Children’s Smile Foundation will be used for the treatment of Polish-American children.

The most money was donated to the bank account of the Rzeszow hospice. “The Subcarpathian Children’s Hospice Foundation in Rzeszow in 2007 was the first in Subcarpathia to engage in the palliative care of terminally ill children in their homes. It purchased medical equipment such as aspirators, oxygen concentrators, inhalers and anti-bedsore mattresses, which continue to be provided for the seriously ill children,” said Rafal Ciupinski, Chairman of the Board of the Subcarpathian Children’s Hospice. “As we grew to recognize the needs of seriously ill children and their families, we understood that their parents sometimes need to place their child in an inpatient unit, where they will be thoroughly cared for or treated. There are also situations when the family needs a “brief” respite in order to take care of their healthy children, which is why we built the first inpatient hospice unit in Poland for incurable sick children. The requirements are tremendous: the children have many healthcare needs, which is why we ceaselessly strive to give the best care to the most needy “victims” of fate. We are expanding our inpatient unit, rehabilitation room, facilities for visiting parents, parents’ grief support group room, and operating room for our children and others,” said Ciupinski. “The PSFCU did not charge any fees when transferring the donations, and there were no operating costs, so the entire amount collected was given to the needy children,” stated Chmielewski. “Once again I am thanking the members of our Credit Union very sincerely for all the donations, even the most modest ones. Never before were we able to raise such an impressive amount for needy children,” he concluded.

Representatives of the recipient institutions also expressed their gratitude. “Thanks to the Members of the Polish & Slavic Federal Credit Union, the lives of our sick children will become better. What has been a dream until now will become real. We were honored to learn that we were one of the three Polish hospices for which money would be collected. But we were very surprised by the amount raised; it is a great achievement and a special New Year’s gift,” said Arnold Sobolewski, President of the “Help Them” Foundation for Children with Cancer and Children’s Hospice. “A new perspective has opened up before us, thanks to which we can raise the standard of medical care for our small patients. We plan to purchase an ultrasound machine, which will serve our hospice patient as well as patients of the Pediatric Oncology and Hematology Clinic at the University Children’s Clinical Hospital in Bialystok, whom the Foundation has been taking care of for over a decade. Although the amount raised is insufficient to fund the machine, we hope that on May 10 of this year, during the jonquil fundraiser under the “Fields of Hope” campaign, we will raise the entire amount. We are counting on the generosity of the people of Bialystok and the surrounding area. Time after time they have given us proof that we can count on them. Once again, we sincerely thank the Polish & Slavic Federal Credit Union, and the smiles of our patients will be the best payback for your kindness,” stressed Sobolewski.

Rafal Ciupinski spoke in similar manner with tremendous gratitude to the donors: “Your help is a huge support for us. The funds obtained will be allocated toward finishing and equipping the operating room. We are very grateful to and thank everyone involved in the “Children's Holiday Smile” campaign for their support. We thank the Polish & Slavic Federal Credit Union and its Board of Directors and Management for the wonderful initiative and real assistance, and we thank the Credit Union Members who supported the PSFCU “Children's Holiday Smile” campaign. Thanks to your help, we will provide better care conditions for terminally ill children in Poland,” said the President of the Subcarpathian Children’s Hospice Foundation. 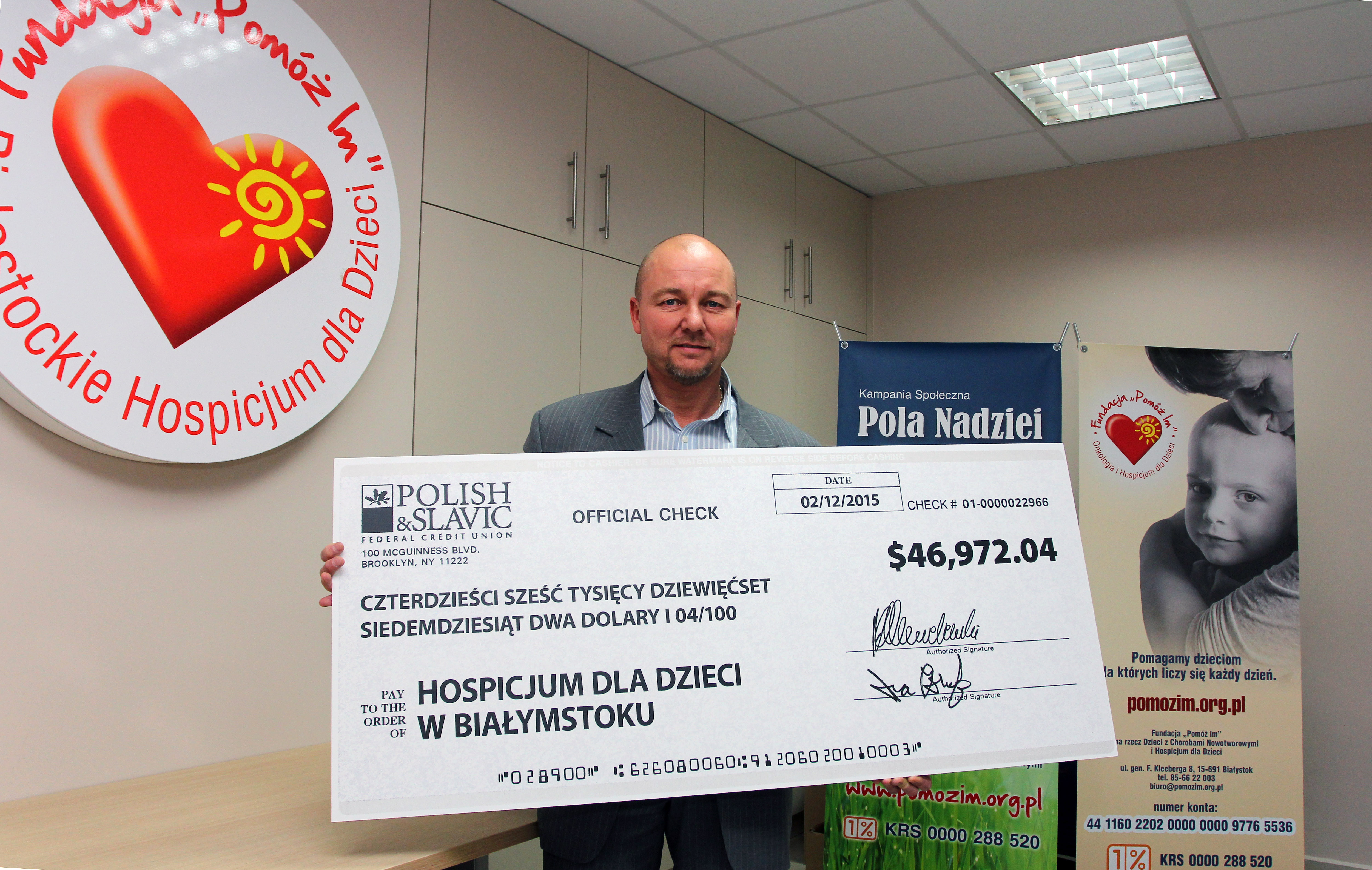 The “Children's Holiday Smile” fundraising campaign proved to be a great success, and therefore it will also be continued during the holiday season this year.
TK

Read the original article in Polish at: www.stefczyk.info/wiadomosci/gospodarka/ponad-150-tysiecy-dolarow-trafilo-do-potrzebujacych-dzieci,13337987247#ixzz3W4DZ8cUV